Evading the Dragon, and winning over crowd 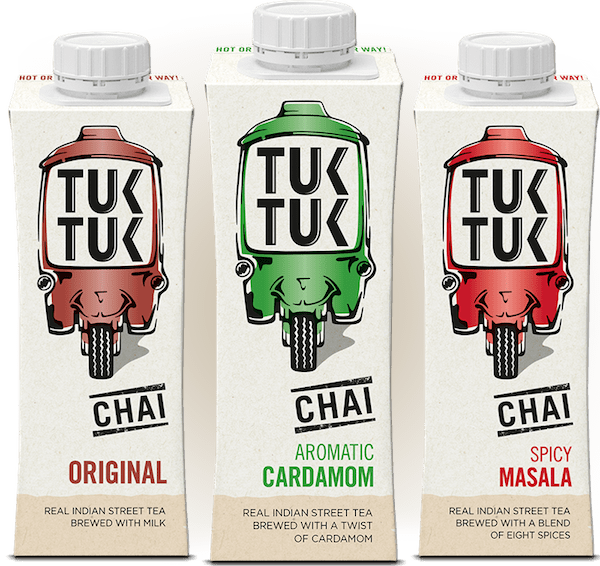 Chai drink business Tuk Tuk Chai has raised over £300k through crowdfunding after stepping back from a £100k investment from Peter Jones on Dragons’ Den.

Tuk Tuk Chai appeared on the first episode of season 16 of the long-running BBC2 TV show, winning over most of the Dragons and subsequently accepting an investment offer from Peter Jones.

However, after mutually deciding to part ways, married co-founders Rupesh and Alexandra Thomas chose to turn to the crowd instead with ambitions of raising £150k.

The business’ crowdfunding campaign launched on Crowdcube the day after the episode was aired, and Tuk Tuk Chai completed the fundraising target in 24-hours for 7.5% of its equity on a valuation of £1.85m.

On Dragons’ Den the start-up had originally sought £100k for 5% equity but agreed an offer from Peter Jones for a 33% stake in return for him becoming an equal partner and splitting business responsibility.

At the end of their successful month-long crowd campaign, the pair have struck an investment of £301,050, more than tripling Peter Jones’ original offer. This was raised by over 400 investors in total.

Tuk Tuk Chai is the first and only ready-to-drink authentic chai, or iced milk tea, available in the UK. In each carton is a brew of black tea leaves, milk, water and optional spices with three distinctive flavours on offer.

The co-founders will put the investment towards building greater efficiency into their production process in the form of a new filtration machine. The brand will also be scaling-up its marketing activity which, when combined, will increase profitability and expansion.

Co-founder Rupesh Thomas said: “The crowdfunding campaign has been epic! We’re so excited about having doubled our target with the support of more than 400 investors who believe in our product and vision.

“We’re excited to be bringing them on our journey with us and look forward to seeing how word of our chai spreads from now. The Tuk Tuk Chai family is getting bigger and we cannot wait to celebrate our successes together.”

Rupesh Thomas arrived in England from Kerala, southern India, with just £600 to his name. He saved over £150,000 to invest into Tuk Tuk Chai and now runs a £2 million company.

Tuk Tuk Chai is currently stocked in Harvey Nichols and around 110 Sainsbury’s stores. The priority for the business is to increase its Sainsbury’s listing, with the goal of growing to 800 stores in the next two years.