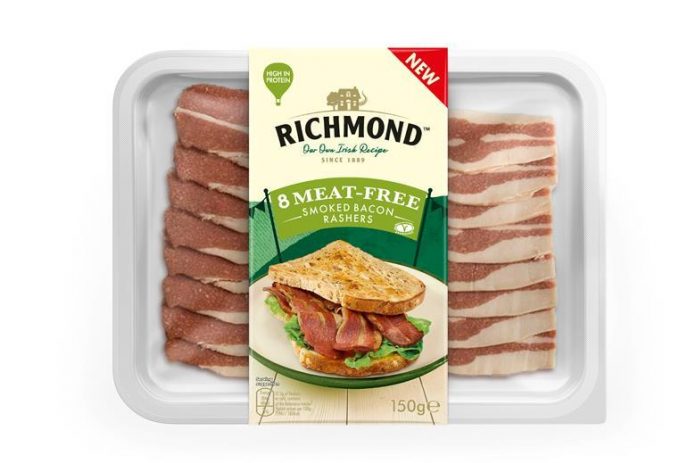 Described as a ground-breaking expansion to its already popular Meat-Free range, Richmond’s Meat-Free Smoked Bacon Rashers will launch next month with the aim of enticing even more families to try meat-free.

“Bacon is a British family favourite, beloved at breakfast time – so we wanted to create something that mimics its meat counterpart and, most importantly, tastes amazing, giving shoppers a meat-free alternative they can rely on,” said Victoria Southern, Category and Marketing Director at Kerry Foods – which owns the Richmond brand.

“This launch is such an exciting milestone for us as a brand as we continue to develop meat-free products that directly cater to the demands of families and support retailers in expanding their ranges in store.” According to Richmond, its meat-free bacon alternative looks and feels just like bacon with a taste profile that is “mild and non-polarising”.

“We’re confident this launch will encourage even more shoppers to try plant-based versions of their favourite meals. No one can resist a classic bacon sandwich and now it’s possible to have a meat-free option that genuinely looks and tastes great,” said Ms Southern.

To support the launch, the brand is investing in an integrated campaign worth £3.5m. It bursts into life in June and will include TV, Social and a shopper campaign to help drive awareness.