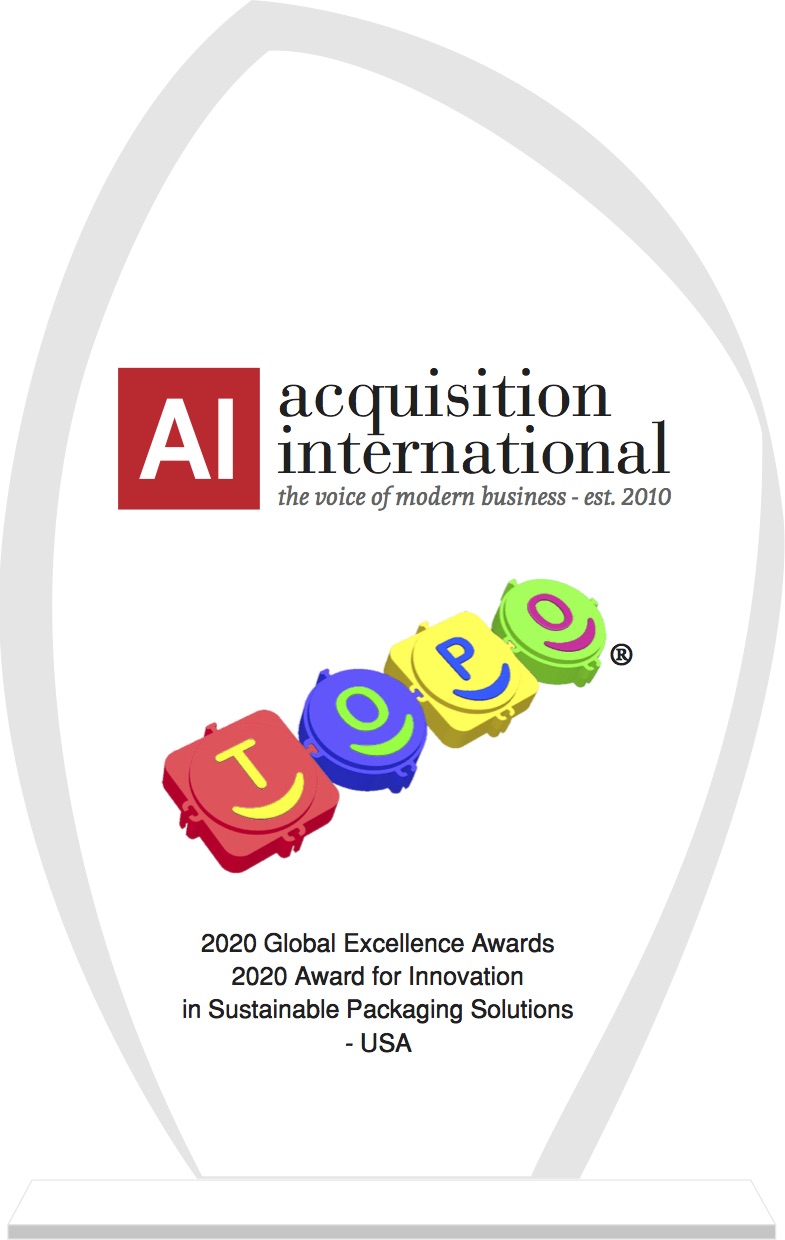 ToPo®, the recyclable screw-top closure that doubles as a collectable toy, has been honoured with a series of internationally coveted awards

It’s the ingenious solution for avoiding plastic waste: a bottle top that converts into a colourful educational toy brick. And, after a year in which ToPo® was recognised with a string of prestigious industry awards, its British designer Willy Johnson is ready to build on that success and introduce his creation to the global mainstream market.
Humbled by a series of honours including the Plastic Industry Award for Consumer Product Design of the Year, Johnson said: “We created a plastic bottle screw-top that converts, after its original use, into a ‘collectable’ toy that’s both fun and educational, in which children can construct any amount of different structures, and play both word games and numerical puzzles or make messages… thus stopping the ‘throwing away’ element.” He added: The ToPos are fully recyclable.”
Annual consumption of plastic bottles is estimated to top two trillion by next year and while much effort is being invested into how we might reduce and recycle them, an incalculable number of screw-top bottle caps continue to be discarded without a moment’s thought. Willy Johnson, however, conjured an ingenious solution to that problem: a plastic bottle top that converts into a colourful toy brick. These bricks can be joined together, Lego like, to create towers and shapes. Instead of throwing away screw-top bottle caps, they can be utilised as free, educational toys.
The ToPo® bottle tops lock in two horizontal dimensions but can also join vertically to create all kinds of shapes. Set to sweep the world with his increation, Mr Johnson has patented ToPo® in both Europe and in the United States.
ToPo® was developed in conjunction with well-known design and production consultants, The Renfrew International Group, and Mr Johnson has already approached a number of children’s charities to climb onboard, particularly with the collection and recycling of the tops.
The toy serves to educate children and make them aware of both the environment and the long term problem of Plastic Waste – sToPollution® – which is causing so much damage to the planet.
It’s this vital message that has helped ToPo® take out a string of awards in the past 12 months.
The Plastic Industry Awards were so impressed with the innovation, it took out their Consumer Product Design for 2019.
ToPo® was also recognised as an Innovation in Sustainable Waste Solutions at the Corporate Livewire Innovation & Excellence Awards 2020.
Johnson himself was crowned Bottle Top Designer of the Year at the M&A Today Global Awards 2020. In America, meanwhile, ToPo® is clearly creating a buzz among leading industry figures. The CEO Today USA Awards singled out Johnson’s “Bottle Top Toy With a Smile” for praise at its glittering gala event last year. More recently, the product was again lauded in the United States, this time at The Finance Monthly Game Changer Awards.
Johnson told judges that during a “Eureka moment” that began with him dropping a plastic screw top onto the floor, he realised that joining one top with another could make a “marvellous Toy unit”, not dissimilar to Lego, which is widely considered the most successful Toy of all time.
“Moving forward with that basic Eureka moment, ToPo® was born,” he said, adding: “The realisation that besides being a useful and enjoyable Toy, ToPo® had some other even greater advantages to offer soon became very obvious. The most important, commercially, being the increase in SALES and therefore PROFITS of any product bearing the ToPo® Crown. Not only “does it stand out in a crowd” but it becomes a FREE TOY – possibly the most attractive proven “Give-Away continually experienced in the field of marketing successes!”