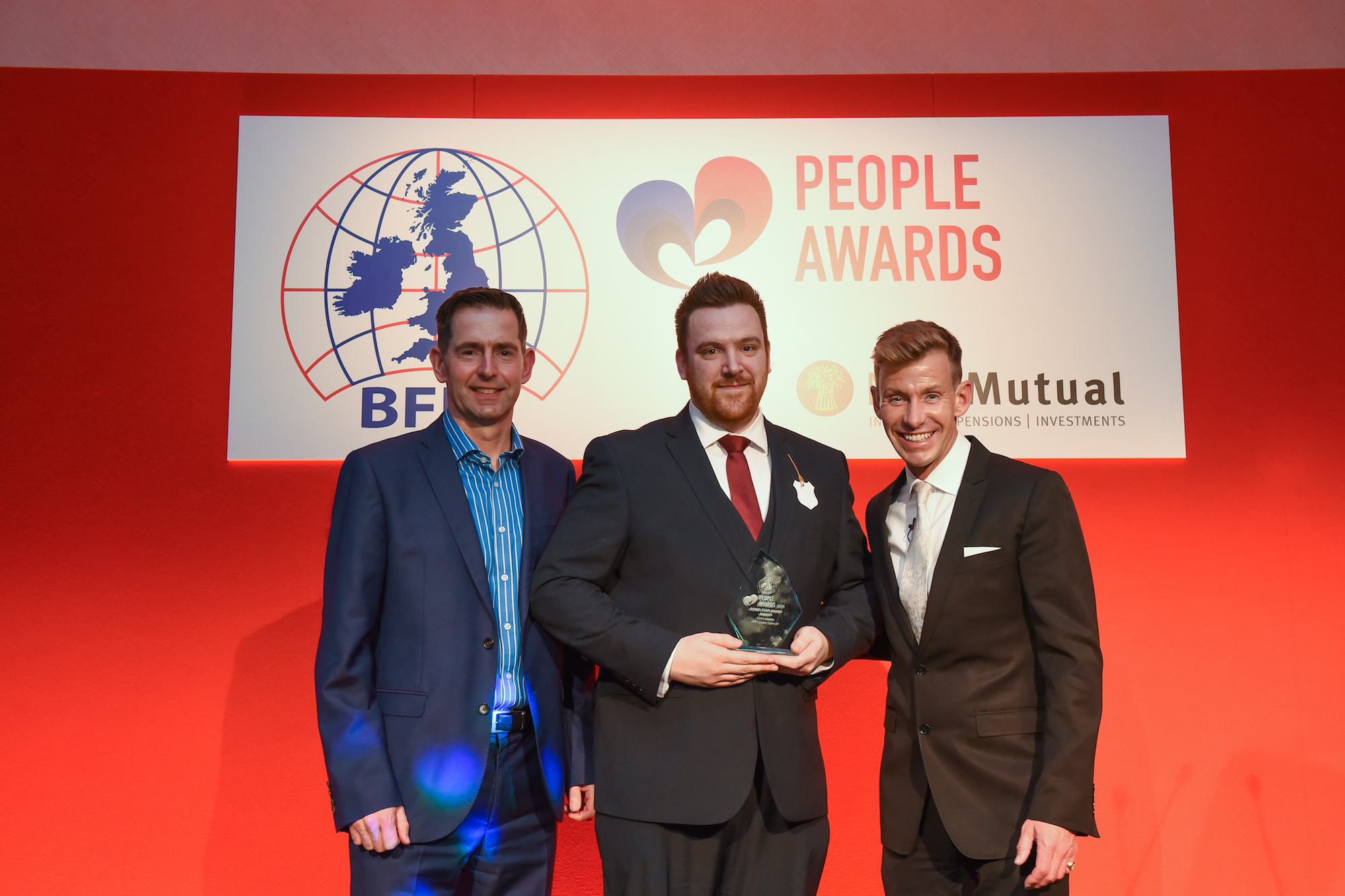 The best andbrightest stars of the frozen industry have been recognised at the British Frozen Food Federation’s (BFFF) first ever People Awards.
The awards were presented at a the Birmingham Hilton Metropole hotel, following the BFFF’s annual business conference. Finalists were invited to an exclusive reception before the awards dinner, where they celebrated their achievements with their peers.
The first-of-its-kind awards was launched by BFFF to raise the profile of the unsung heroes of the frozen food industry. Nominations were submitted by the finalists’ manager or team leader and covered a wide range of job roles and experience.
The awards received entries from across the industry, with the overall champions being selected from 10 categories including Commercial Champion, Purchaser/Buyer of the Year and Factory Manager of the Year.
Highlights of the night included the Rising Star and the Lifetime Achievement awards. The Rising Star award was won by Chris Healey, site manager at XPO Supply Chain UK. He was praised for: “delivering clear and tangible benefits to every part of the business he’s involved in. Chris is a true rising star and a prime example of the great and talented people we are so fortunate to have in the frozen food industry.”
The Lifetime Achievement award went to Andy Breffit, commercial director of Hopwells, one of the UK’s largest independent frozen food distributors. He was recognised for his contribution to the frozen food industry. Being presented with the award, Mr Breffit was described as ‘as an excellent mentor who commercially is renowned for striking the sharpest of deals’, all qualities which have earned him this prestigious award.
Commenting on the winners, BFFF chief executive, John Hyman, said: “We launched the People Awards to celebrate the unsung heroes that continuously drive the frozen food industry to be the dynamic and developing sector that it is. The standard of entries we received was exceptional and it was really encouraging to see how many industry leaders put forward members of their teams that they believe are deserving of recognition.”
Other winners were Jane Marren from Company Shop who won the Commercial Champion of the Year, Sharni Rigby from The Authentic Food Company who won the Technical Champion of the Year, Todd Hallam from Chalcroft Construction who won the Health and Safety Champion of the Year, Brennan Green from Paramount 21 who won the Sustainability Leader of the Year, Rachel Cook from Bidfood who won the Product Developer of the Year, Jason Ash from Greenyard Frozen UK who won the Factory Manager of the Year, Michael Round from Rick Bestwick who won Supply Chain/Logistics Champion of the Year, Ginny Durdy from The Ice Co. who won Marketer of the Year and Michelle Clever from The Authentic Food Company who won Buyer of the Year.
All entries were judged by a six-strong judging panel of experts from across the food and drink and HR industries. They included Lynda Hulme, HR director Fowler Welch, Vince Craig, BFFF board member, Alison Cannon, founding partner, Resonate Search & Selection, Noli Dinkovski, associate editor, Food Manufacture, Nick Downing, IGD commercial director and Cheryl Bennett, director, Pelican Communications.
For more information about the BFFF People Awards, please visit www.bfffpeopleawards.co.uk