Disaster-aid drones made from food 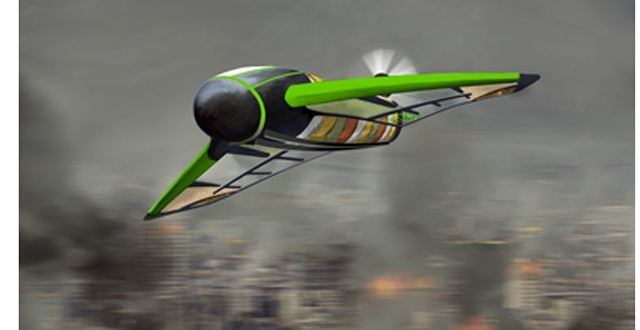 Plans for the first ever aircraft to be made from food components were announced yesterday recently at the NSF International conference in London.

Pouncer™, an unmanned aerial vehicle (UAV), is the brainchild of Nigel Gifford OBE, who was one of the innovative team behind the unmanned Ascenta™ high altitude, long endurance platform acquired by Facebook in 2014 as part of its internet global connective programme.

He told FMCG News: “Pouncer™ addresses the fast reactive need to deliver food aid into remote, difficult, damaged and broken infrastructures by overflying the difficulties and placing life-sustaining nutrition exactly where it’s needed.” Nigel thought of the concept by combining his “far flung food” expedition background with his aerospace skills.

The Pouncer™, covered by patent application, has an airframe skin made from biodegradable starch-based thermoplastic, filled with spars of compressed and vacuum sealed foodstuffs. The Pouncer™ fuselage is filled with the staple diet of those receiving supplies and carries water and fuel for cooking. It is to be produced in various weights to meet differing requirements.

A charitable trust that will see the UAVs built along with the food spars and other parts of the airframe, is currently being set up.

“Assembly will be simple and will not require a specific skill set. The estimated cost of the largest airframe “build and fill” is targeted to be under £100 and deliver approximately 200lbs of nutritious food,” said Nigel.

Powered by a compressed air or solid fuel unit, and either launched from a tailgate aircraft at altitude or by a ground based catapult,  the flight endurance of Pouncer™ will be up to 100 km to a landing zone fixed by GPS. It will either fly to the ground or use a simple parachute deployed at low altitude to reach those cut off from any ground support. Nearly every component has a nutritional or secondary practical value once delivered.

The aim is to set up Pouncer™ depots around the world to meet needs as they arise. In 2015 there were 150 major national disasters which affected millions worldwide. Asia was the worst hit with earthquakes, floods and famine. Nigel will be collaborating with NSF International, a global public health organisation, during the intense run-up to full production within the next 12 months and in the global roll-out thereafter.