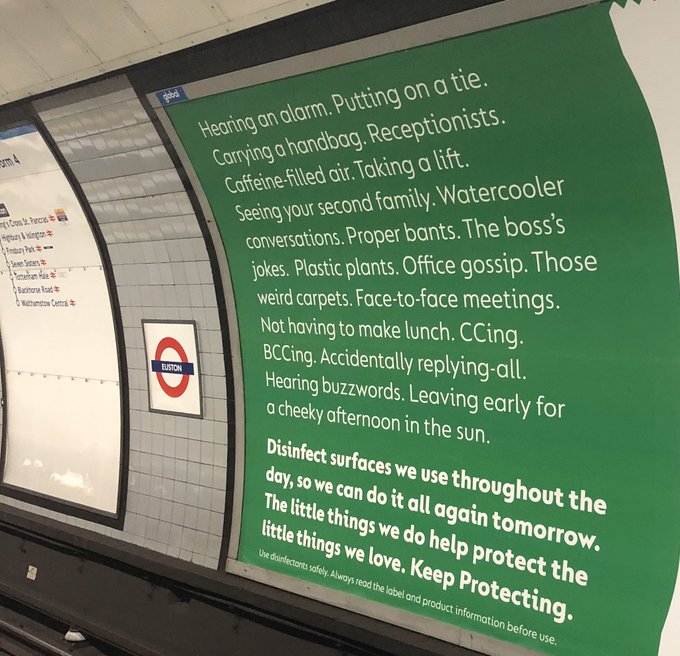 It started out as a well-intentioned campaign to connect with London’s commuters. However, a week on, Reckitt Benckiser is still batting off accusations that its ‘back to work’ ad has caused lasting damage to its flagship Dettol brand.

Dettol teamed up with Transport for London to provide free hand sanitiser across 270 London Underground stations.

The partnership is part of the global healthcare giant’s aim to help protect the nation and reduce the spread of coronavirus.

But as Britain was being encouraged to get back to work, the free hand sanitiser initiative was overshadowed by some curious, accompanying advertising about the ‘joys’ of the office.

A week later, marketing experts and the capital’s commuters are still deep in debate as to whether the campaign was a hit – or a major miss.

The underground advert compiles a list of things workers have supposedly missed about the office. It includes “office gossip”, “plastic plants”, “proper bants”, the boss’s jokes” and “accidentally replying-all”.

Rather than see the funny side, thousands of Twitter users rounded on the Dettol campaign.

It appears the advert was initially tweeted by a user who cropped the Dettol brand name out of her image, creating confusion that it was actually a government ad campaign. For those Londoners who prefer to work from home, it was enough to trigger a meltdown.

One user said it summed up “everything I hate about the old system of office life” while another said it reminded them of everything they hate about “working in an office”.

The advert was criticised by another for “romanticising the worst commute possible”.

It was also slammed as a poor imitation of Irvine Welsh’s Trainspotting “choose life” which caused the Trainspotting author to retweet the image himself – with the comment “Choose death.”

Global business magazine Campaign has since turned to a who’s who of leading marketing experts, asking them whether RB’s ‘back to work’ ad push had caused lasting damage to the Dettol brand.

Sara Tate, TBWA\London Chief Executive, said that in a world where “disinfecting is the new everything”, the campaign “may be a misstep, but don’t think it will do any substantial damage to Dettol’s chance of being ‘most lusted for brand’ in 2020.”

Paul Domenet, Communications Creative Director, Free The Birds, disagreed, arguing RB was guilty of “an act of supreme arrogance”, adding: “A dab of Dettol is not going to clean that up.”

Jon Goldstone, Global Managing Partner at The Brandgym, weighed in somewhere in between, stating: “It’s not a disaster, but it could have been much better.”

Alan Young, Chief Creative Officer, St. Luke’s, said that while Dettol had “misjudged” the mood of the commuting public who don’t seem to share the brand’s enthusiasm for taking public transport during a deadly pandemic, “it doesn’t really matter”.

And why doesn’t it matter?